One Dark Cloud: A Counting Book

Originally published in India as One Dark Cloud, this newly titled counting book works well in a North American setting. One of the things that sets One Rainy Day apart from most counting books is that the counting activity extends to 11, rather than the more common terminal point of 10. Another difference is that, imbedded within the illustrations, is a storyline for readers to discover or invent.

Illustrated with paper and fabric collages, One Rainy Day 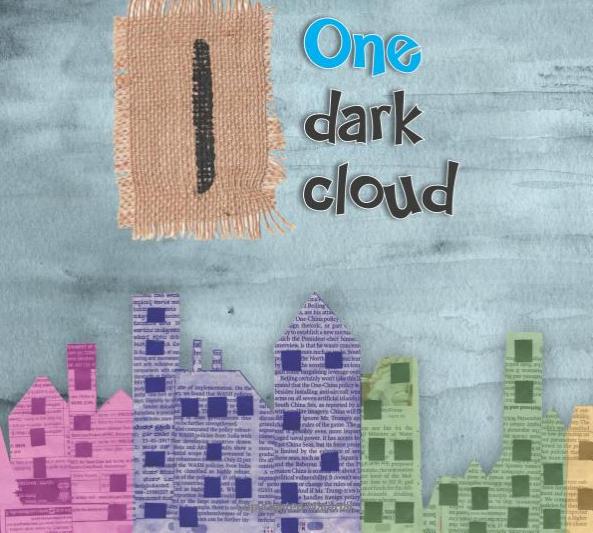 opens with 1 One dark cloud poised over the silhouette of a city. Then “2 Two gentle raindrops” fall before “3 Three croaking frogs” come out to frolic in the newly formed puddles. Understandably, children, in the form of “4 Four eager feet”, two bare and two in socks, are also drawn to the puddles’ latent fun.

Sensible adults intervene, and “5 Five colorful umbrellas” are distributed. With puddle play ended, “6 Six dripping raincoats” are hung to dry while “7 Seven muddy books” rest beneath the still dripping raincoats. The cold and wet puddle-playing children are warmed by “8 Eight cups of tea”, “9 Nine spicy samosas” and “10 Ten warm blankets”. The refreshed children again take to the now sun-filled streets to sail “11 Eleven paper boats” in the remaining puddles. The closing spread returns to the opening spread, and bright sunshine has replaced the previously dark sky “[a]nd one bight rainbow” arches over the city skyline.

So, the contents of the previous paragraph were “my” story of what I “read” in the illustrations. Perhaps your “reading” of One Rainy Day’s illustrations will lead you to create a different narrative. 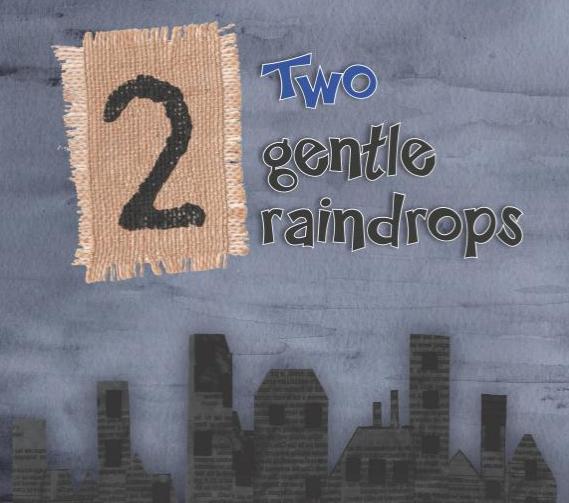 The two illustrators’ collages are quite detailed and deserve to be revisited to discover what may have been missed on the first read-through. For example, on the “4 Four eager feet” spread, half a frog can be seen hopping off the recto, suggesting that perhaps the children had commandeered the frogs’ newly-formed puddle. Additionally, an abandoned rubber boot raises the possibility that these socked and bare feet had originally been shod. On “6 Six dripping raincoats”, one of the umbrellas from “5 Five colorful umbrellas” can be seen while the other half of the teapot that appears in “8 Eight cups of tea” can be found in “9 Nine spicy samosas”. 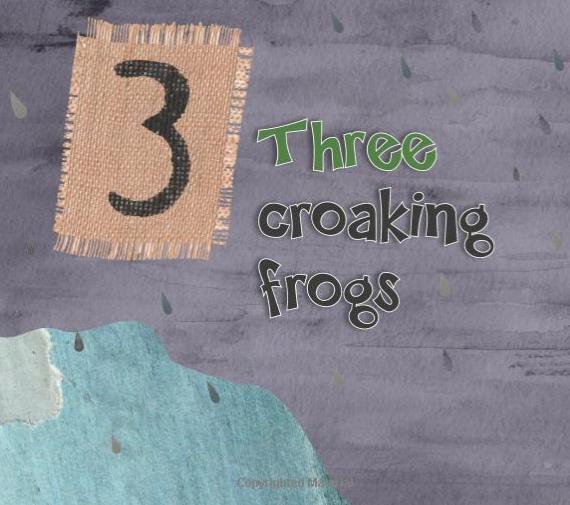 And, of course, given the book’s subtitle, One Rainy Day can simply be treated as a counting book. Each number is presented via a double-page spread with the number being presented on a fabric background and then spelled out along with an indication of what it is that’s to be counted, an example being “Three croaking frogs”. Overall, children just learning to count should have little difficulty in the counting task as the objects to be counted are generally well-differentiated. The only slightly jarring aspect of One Rainy Day’s contents was its inclusion of “8 Eight cups of tea”, tea being a beverage not generally associated with the book’s new North American child audience. While “9 Nine spicy samosas” does reflect the book’s origins in India, samosas are certainly a most welcome part of Canada’s multicultural foodstuffs.

One Rainy Day would make an excellent home addition, and it’s a “must” purchase by libraries serving preschoolers.

What Little Fish wants to do more than anything in this world is fly. Dissuaded but not discouraged by those around her, she flaps her tiny fins and practices jumping. But can Little Fish ever expect to take flight? A sublimely delightful tale by Lavanya Karthik with strikingly patterned illustrations by Satwik Gade and Ashwathy P.S. ‘Fly, Little Fish!’ is an ode to the soaring possibilities of perseverance. ‘Sky’s the limit’ is what my parents told us, whenever I was engulfed by self-doubt. But times have changed, I will instead tell my kids that, ‘There absolutely is no limit’. And that’s what this book laced with colorful illustrations sets out to tell young mind.

The book has an extremely attractive cover page and entices kids to pick it up from the book shelf. With its hard cover, the book is still light and easy to manage.

‘Fly, Little Fish’ is a book for little minds just beginning to read short phrases and sentences. Even if your kid does not read yet, like mine they can definitely enjoy the beautiful illustrations tell a story on their own.

More from Our Portfolio